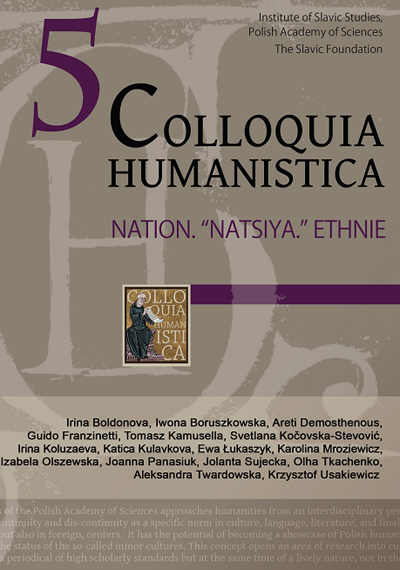 Summary/Abstract: The main aim of this article is to reconstruct the Ruthenian nobleman’s (szlachcic) perception of “us” and “the sphere of familiarity” in the second half of the sixteenth century and to place him within his respective communities and social groups by analyzing successive levels of his identity. It seems to be particularly important to study ideas and awareness of the common representative of the Ruthenian political nation of the Grand Duchy of Lithuania, as scholars have so far been paying attention only to the notions of identity held by particular representatives of the elite, or else by intellectuals. Clientelist relationships of particular Ruthenian families, which are of crucial importance for reconstructing the complete image of the period, have not commonly been the subject of scientific research. The main thesis posited by this work is that the perception of one’s inner, familiar circle, of “us” as opposed to “them,” in the case of Ruthenian nobility was as multilevel as their national identity. To elucidate the posed questions, I am going to analyze Filon Kmita’s personal correspondence, his public, family and matrimonial relationships, the social practices he engaged in, and military and official environments to which he belonged. Such approach can help us not only to reconstruct the circle of relationships of this remarkable person but also to show how one of three primary nations of the Polish-Lithuanian Commonwealth – the Ruthenians – was experienced from the perspective of one of its representatives.