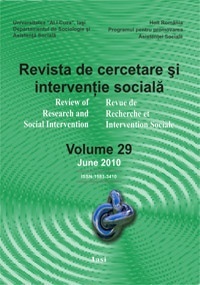 Summary/Abstract: Socio-cultural research of ethnic minorities, is a hermeneutical process involving simultaneously the analysis of discursive strategies available to communities (ethnic),and the meta-narrative material. The type of discourse research dominant in the community, produces changes in the social pragmatics of that community. Action research study presents the discursive strategy of socio-cultural action. It emphasizes on quality characteristics of the method, which can be interpreted as a semiotic analysis of communication practices in the community, with effects in changing behavior patterns. Community development resulting from changes to the rhetoric used by the community. Understood in the manner proposed by Gergen constructionism, community is the space where there is a process of constant renegotiation of the meaning of social reality. A specific way of social pragmatics which can be used in transforming the social rhetoric of ethnic and multi-ethnic communities is the appreciative inquiry, transformative method aimed at harnessing the resources within the community by exploring the discourse level of positive experiences.