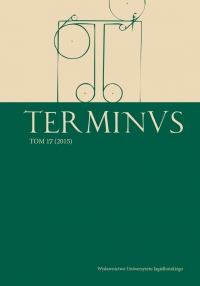 Summary/Abstract: The objective of the article is a comparative analysis of the biblical epic La Judit (1574) by Calvinistic poet Guillaume Salluste Du Bartas and the Polish paraphrase written by Rafał Leszczyński (1620), who was the leader of Polish Protestants in Greater Poland. The current state of research on both poems is very modest: the works were discussed exclusively in introductions to the critical editions cited above. In the present article, the two versions have been compared on three aspects: epic poetics, confessional tinge and references to regicide, which was a contemporary issue in both countries in those times. The French poem is composed of six books and comprises 2,837 lines of 12 syllables each, rhyming AABB. The biblical narration was enriched with numerous allusions to contemporary events as well as digressions on both moral and political issues. It is written in a high style enriched with Homeric comparisons, characters’ speeches, descriptions and erudite catalogues. Leszczyński’s adaptation is shorter than the French original: it is composed of five books comprising 1,640 lines of 13 syllables each, rhyming AABB. This reduction owes to the removal of the digressions and contemporary allusions, without touching the qualities of the epic style.