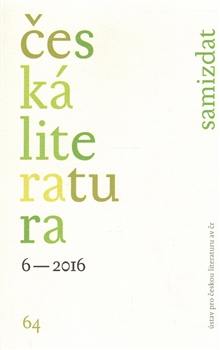 Summary/Abstract: This study deals with the circumstances surrounding samizdat publication of Jiří Kratochvil’s Medvědí román (Bear’s Novel) in 1985. The author, who had hitherto brought out practically nothing for the public, offered his work for the Petlice typescript series, but it was not accepted for publication. On the recommendation of his friend Milan Uhde, Kratochvil then reworked the novel and had the amended version brought out both at Milan Jelínek’s Brno samizdat publishers and shortly after 1989 at the Atlantis publishers. Ten years later Kratochvil went back to his original manuscript and published it under the title of Urmedvěd (Ur-Bear) at Druhé město publishers. This case attracted media attention, as the author had interpreted Milan Uhde’s previous recommendation to rework the novel as prescriptive, but then even the literary historians began to take an interest: the case is described in V obecném zájmu (In the Public Interest, 2015) as a manifestation of the social regulation of literary output in the samizdat environment. In polemics over this idea the author points out the specific circumstances surrounding the case, while examining the conditions and internal organization of samizdat publishers’ activities during the 1980s in greater detail.