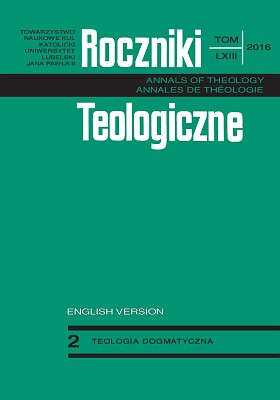 Summary/Abstract: The article shows the key aspects of the Christological approach to Karl Barth’s teaching about “the humanity of God”. The author argues that in the mirror of Jesus Christ’s humanity the humanity of God included in Jesus’s divine nature is revealed. It is in Jesus Christ that kenosis and gloria, humanum and divinum meet in an amazing way; and in the negotiating space which is constituted by His Person they explain each other, speaking more sonorously with their own voice. Hence the point of departure for a reflection on the problem that is posed here, is looking closely at the formal basis of Barth’s theology. Jesus Christ’s central place – with respect to the contents, form and method – is considered to be one of its most important attributes. The author of Die Kirchliche Dogmatik starts his argument by discussing Jesus Christ’s pre-existence with the help of the doctrine of “the gracious election” that is a modified conception of his earlier Trinitarian theology. It says that God “from the beginning” is directed to man, suggesting a pro-human character of God’s being and acting. In the light of Barth’s doctrine Jesus Christ, as the second Person of the Trinity, is not only the object of election”, but He is also the electing subject. As the One Who Wants to complete the Father’s salutary work, he is the justification and guarantee of our salvation. Barth categorically pronounces himself in favor of the Christological paradigm of the Revelation saying that around history and the dialogue, in which God and a man meet and are together – around a mutually made and kept relation – there is the most complete opening and exchange. It happens in the Person, since Jesus Christ is in the only and in the highest degree: a true God's man (Gott des Menschen) and a true Divine Man (Mensch Gottes). The phrase about the “humanity of God” – is Emmanuel, to whom we pass from the Christological centre, taking into consideration the theological and anthropological consequences following this movement.

W poszukiwaniu istoty miłości u Franciszka Sawickiego IN QUEST OF THE ESSENCE OF LOVE IN FRANCISZEK SAWICKI 2010 Teologiczne rozumienie zbawienia i jego znaczenie w życiu Kościoła Theological Understanding of Salvation and its Significance in the Life of the Church 2011 TRYNITARNY CHARAKTER WIARY CHRZESCIJAŃSKIEJ THE TRINITARIAN NATURE OF THE CHRISTIAN FAITH 2012 Między znakiem krzyża a symbolem serca. Hermeneutyka miłości Boskiej i ludzkiej Chrystusa Between the Sign of the Cross and the Symbol of the Heart Hermeneutics of Christ’s Divine and Human Love 2013 Miłość Boga w ujęciu J. Razingera/Benedykta XVI The Notion of God’s Love in the Interpretation of Joseph Ratzinger/Benedict XVI 2013
2020 © CEEOL. ALL Rights Reserved. Privacy Policy | Terms & Conditions of use
ICB - InterConsult Bulgaria ver.1.5.0917