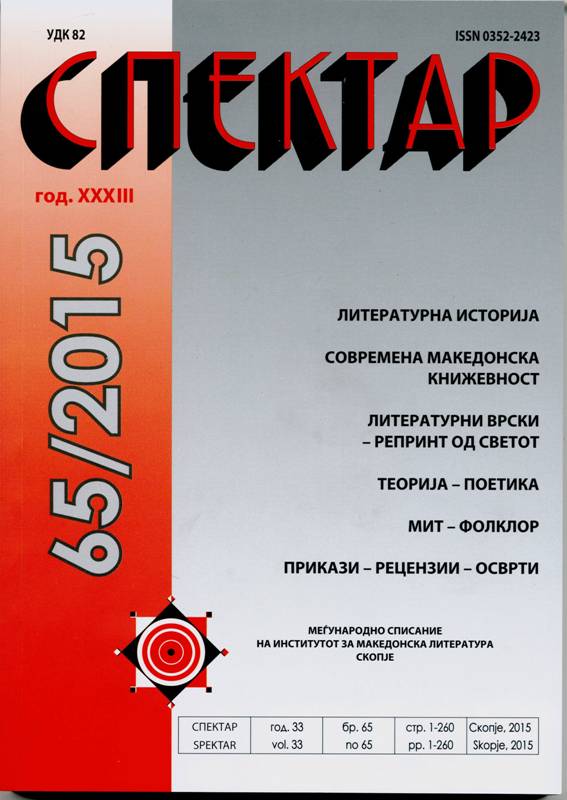 Summary/Abstract: The literary conceptualizations characteristic of Slavko Janevski's work are significant tell-tales of the character of the literary processes tied to the tumultuous 20th century, both in terms of Macedonian literature and art as well as the world's. Slavko Janevski is the creator of an exceptionally rich production, also known for its genre diversity. Namely, his rather impressive opus consists of several poetry collections - including shorter and longer poems, well-known novels and a particular 6 novella, short-story collections, travelogues, numerous children's books, art cinema scripts, essays, art criticism. In his literary-essayist output, Janevski looks for answers: be it those tied to the nature of literary criticism or literature and contemporary life, or the evolution of a people's linguistic culture, or literary confrontations, or literary magazines, or the differences between realists and modernists, or literary provincialism, etc. On several occasions, Janevski comes back to the themes and genre of children's literature, whilst understanding its true role in the process of shaping young minds, establishing interpersonal relationships and their social role, as well as shedding light on the social phenomena that define the world. Janevski's essays bring forth an uncompromising Macedonian polemicist, one working actively against any kind of literary or artistic triviality or spiritual kitsch; his is the most radical criticism against the often unstoppable contamination of nature and man's surroundings. As an engaged author, he speaks against the bureaucratic grayness and the conceitedness of political institutions, pointing out the necessity for man's awareness and engagement in all segments of his social, political, and cultural existence.