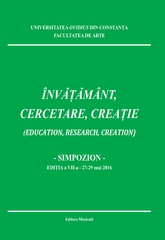 Summary/Abstract: The Megleno-Romanians represent a particular part of the Romance-Languagespeakingethnography of the Eastern areas of Europe. Originating in northern Greece, theymoved to Romania in the early twentieth century, hoping for a life free from the struggles andshortages of requirements that they had faced on their native territories.Currently, in the village of Cerna, the Megleno-Romanians boast a musical repertoirethat is predominantly in their own language. This has led me to the premise that, within thecontext of the family, there has always existed there a pure Megleno-Romanian repertoirethat has circulated orally until today.However their cohesiveness as an ethnic group in the village of Cerna has resulted inrepertorial uniformity, since their songs are sung and their games played by all residents,regardless of their place of origin. Not only has the repertoire suffered from a lack ofcreative input, but it has also suffered from a lack of players of the instruments they considertraditional.The repertoire was attenuated by having to be adapted to the technical specifics of theperformers on the ţigulcă, whistle, large pipe, and tambura for whom the songs were notwritten. Thus those songs and game melodies which could only be performed on the Gaidawere lost.