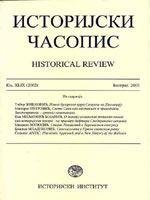 Summary/Abstract: In the context of the final phase of the Eastern Crisis of 1875–1878, solutions of the Congress of Berlin and implementation of its decisions by the International Commission for the demarcation of Serbia in 1878–1879, one of the less significant issues that arose was that of the border on the Drina river. During the demarcation of 1878–1879, the majority of the commissioners observed this issue as a matter of relations between Austria­-Hungary and Serbia, and they reacted primarily at the initiative of the Austrian commissioner. The work of the International Commission, and the position taken by Serbian diplomats and commissioners, can be analysed through the perspective of defining a new system of international relations after the Berlin Congress, and, in this context, defining the position of newly independent Balkan states, including Serbia. At the micro level, the conflicting views of representatives of the major powers in connection with the demarcation of new Serbian borders, reflected deeper strategic concepts of their governments regarding the preservation and strengthening of their position in the Balkans. The issue of the border on the Drina river indicated the possibilities of action of a nominally independent Balkan state neighboring a great power which had to prove its strength primarily through the expansion of its sphere of influence in the Balkans. The basis of the Monarchy’s policy was the attitude that in all issues that could be defined as bilateral, the possibility of interference of any other power had to be excluded.