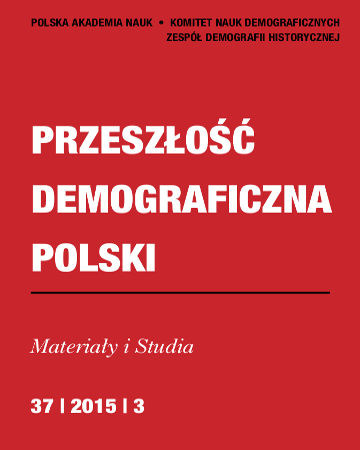 Epidemia cholery w Krakowie w 1866 roku. Analiza demograficzna i przestrzenna
An Epidemic of Cholera in Cracow in 1866. A Demographic and Spatial Analysis

Summary/Abstract: The article presents the causes and effects of the epidemic of cholera that broke out in Cracow in 1866. The presentation is based on archival material collected when the epidemic was raging and when it was over. The basic source are tabular sheets and responses to a questionnaire sent to physicians by the Sanitary Commission just after the epidemic was over in 1867. The notes prepared by Cracow physicians are a splendid source for the research of that kind as they were made shortly after the epidemic.The article also presents a description of how the epidemic was approaching Cracow and its probable route along which it reached the city. The article includes various views on the aetiology of the epidemic and on various methods of curing it. In the article there is an analysis of the mortality rate according to sexes, faith and the place of treatment. The epidemic has been depicted as it was evolving in time and space; in order to make the depiction the author has used some geostatistical methods, including the method of hierarchical clustering. The incidence of cholera and its mortality rate have been presented on two maps, on which the clusters have been marked too.According to the research, in the case of Roman Catholics the disease attacked mainly the poor and malnourished social groups, who lived in poor housing conditions or were homeless. In the Jews the disease attacked various social groups, not only the poorest.The ability to survive has been analysed in two religious groups of Cracow: the Roman Catholics and the Jews. The results have not confirmed the statistical higher resistance of the Jews to cholera, which might have been suggested by the first data of the graph. In another part of the article Cox regression has been used to verify which factor was responsible for a higher mortality caused by cholera. The method of backward (stepwise) approach has not confirmed that such factors as sex, social class, faith or place of treatment influenced the probability of death. Among those factors the most doubtful one is the place of treatment, i.e. a hospital or a dwelling place, which has been rejected in the last step of the analysis. It may be the result of the fact that the sample was not big enough. The epidemic of 1866 was relatively mild, and the city council was well prepared; it was also important that there were many highly-qualified physicians engaged in the battle against the epidemic and access to medicines was not difficult.