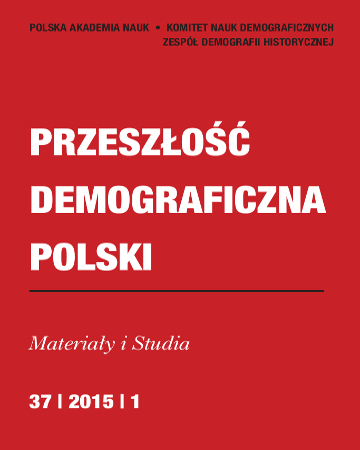 Badania nad rodziną w miastach zaboru pruskiego w XIX i na początku XX wieku. Stan obecny i perspektywy badawcze
Research on the Family in the Towns of the Prussian Partition in the 19th and at the Beginning of the 20th Centuries. The Present State of Research and Its Prospects

Summary/Abstract: The article deals with the problem of demographic changes that take place in thefamilies living in towns of the Prussian partition in the 19th century and at the beginningof the 20th. The most important populational parameters have been presented; on the basisof these parameters it is possible to observe trends and the directions of changes, whichare part of a much wider, pan-European process of demographic transformation. Theresearch has been carried out on the basis of the information concerning a few towns ofthe Prussian partition (Toruń, Poznań, Gdańsk, Elbląg, Starogard, Chojnice, Chełmża).A special attention has been paid to a decreasing age of newlyweds, disappearing barriersfor mixed (interfaith) marriages, loosening of social and professional requirements, andweakening of the territorial barrier while choosing the spouse. The fact worth noticing isthat the interval between the day of birth and the day of baptism was longer than before.Other facts that are of interest are: a decrease of the rate of birth/mortality, as well asof the coefficient of births and deaths at the turn of the 19th and 20th centuries. Anothersphere that has been researched is the value of infant mortality, quite high in the 19thcentury and slowly diminishing afterwards. A combination of civilisational processes,mental changes of human beings and changes in their customs had a decisive impact onthe shape and size of the family. It was the beginning of essential transformations, whichare still taking place now and keep influencing the demographic situation of the population.The article also contains a proposal of further demographic research on the Jewishfamily in the towns of the Prussian partition, because that subject is often omitted. In theend, some new directions of research have been suggested and an introductory literaturehas been given, too.