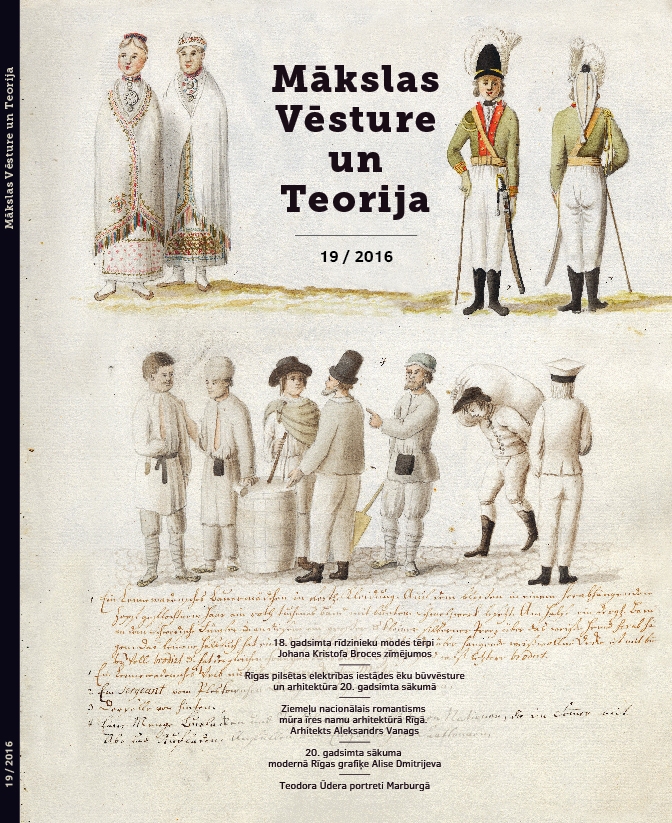 Summary/Abstract: In autumn 2015, while visiting retired professor of architecture Georg Solms in Marburg (Germany), a number of unknown or completely forgotten works by the Valmiera-based harsh symbolist Teodors Ūders (1868–1915) came to light. There were 16 works in all by this artist known as the “great stranger” and “epic portrayer of the peasant theme in Latvian graphic art” – twelve oval copies in pastel, three larger rectangular original pastels and one Indian ink drawing. The value of this find is increased by the fact that no previous information existed on Ūders having ever worked in this technique, which he probably learned at the Alexander Stieglitz Central School of Technical Drawing in St. Petersburg. In the portrait copies and original pastels created roughly about 1907, Ūders has captured several generations of the von Gersdorff family members of the Baltic German nobility of the 18th–20th century. These works demonstrate echoes of Rococo, Biedermeier and more romanticist moods. The von Gersdorffs owned an old von Rosen family property – Augstrozes (Hochrosen) Manor and the neighbouring small Dauguļi (Daugeln) Manor – in the Latvian part of Livland in the second half of the 19th and early 20th century. The von Gersdorffs managed the latter manor till the Agrarian Reform in Latvia in the early 1920s. Initially the portrait copies were located in the salon of the Dauguļi manor house. They depict the self-confident Livland Landrat Moritz Friedrich von Gersdorff (1747–1820), a “lady with pearl earrings”, his first wife Dorothea Charlotte Elisabeth (1751–1793) and their daughter Margarethe Elisabeth Dorothea (1776–1829). Others were copies of portraits depicting Dorothea Charlotte Elisabeth’s father, Russian Army colonel Moritz Heinrich von Gersdorff (1714–1759), his younger brothers and their wives – Salomon Johann von Gersdorff (1724–1799) and his wife Maria Barbara (1734–1808 or 1812), Johann Friedrich von Gersdorff (1735–1805) and Maria Elisabeth (1748–1775), Dutch Army colonel Hans Heinrich von Gersdorff (1728–1773), French captain Berend Wilhelm von Gersdorff (1727–1785) and Carl Friedrich von Gersdorff (1716–1788), and the von Gersdorff sisters Wilhelmina (1803–1871), Agnese Louise Constance Marie (1805–1885) and Natalie Euphrosyne Dorothea (1810–1865). These works whose originals remain largely unknown, demonstrate that Ūders was quite well versed in the styles of previous centuries. Alongside copies, there are original works portraying Carlos Georg Heinrich von Gersdorff (1815–1869) and his wife Angelique von Zoeckell (1827–1900); the most interesting is the portrait of Alexandrine von Gersdorff (1870–1946), the only one created during the depicted person’s lifetime. The side view of a young, reservedly elated woman in light tones, reminding us of a low relief image with accurately captured facial features, is a lyrical accomplishment untypical of Ūders. The Gersdorff family portraits were possibly commissioned because the originals or at least some of them were in bad condition due to age or other causes. It could also be that the originals were located elsewhere but the Gersdorffs of the Dauguļi Manor wished to see their ancestors on a daily basis. But for Ūders who had returned to Valmiera after unfinished studies and work in Voronezh and Yalta, making enlarged portraits after photographs, a practice he had begun already before moving to St. Petersburg, was a major source of family income. These discoveries are more valuable in light of the fact that Ūders is among those Latvian artists whose creative legacy suffered most during World War II. Ūders who considered himself as a future portrait painter during his study years, nevertheless saw this way of earning a living as a less important part of his art; his researchers and biographers held similar views. Ūders’ decently painted Gersdorff family portraits were unknown because the artistically educated Freda von Gersdorff (1902–1992) who married the German sociologist Max Graf zu Solms-Rödelheim (1893–1968) in 1937, moved to Marburg together with her mother Alexandrine, taking with them the gallery of portraits of their ancestors and some other family relics. A more typical work by Ūders depicting a snowy peasant farmstead scene has been preserved in the Dauguļi Manor visitors’ book filled in the course of half a century from 1890 to 1941. The work is found next to signatures of Baltic German noble families, such as the Rosens, Mellins, Vegesacks, Mengdens, Campenhausens, Vietinghoffs, Freytag-Loringhovens, Wolffs, Engelhardts, Transehes, Sieverss, Wrangells and others. Drawings by the Augstroze Manor owner Conrad Alexander Arthur Carlos von Gersdorff (1854–1931) and his guests were also included, allowing us to trace the changing epochs and tastes. Ūders knew the Baltic German nobility residing nearby quite well. On the one hand, manors embodied for him the calm beauty of tradition but on the other, he belonged to that rebellious Latvian generation who felt social discomfort and struggled to gain their position in Latvian art. However, these pastels created in the last year of the revolution that shattered Baltic traditions are not just a previously unknown episode of cultural history that tells of the cooperation between Baltic Germans and a Latvian artist who had not finished his education. The works demonstrate Ūders’ skills in pastel painting and allow us to establish that he portrayed not just teachers and pastors but created portraits of nobility and their copies too.