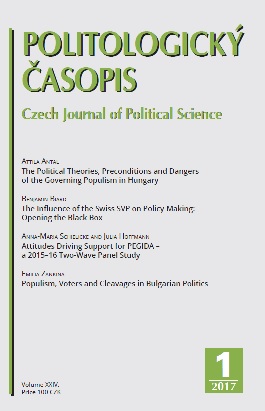 Summary/Abstract: This article assesses the influence of radical right populist parties on policy-making in Europe. Much scientific research has been conducted on populism, theoretically and empirically, through different facets: their history, their leaders, their discourses, or their electorate. Yet the populist phenomenon has barely been studied by policy analysts by policy analysis. What influence do populist parties have on policy-making? This question is crucial since these parties are on the rise in Europe and are often perceived as dangerous for democracy. This article investigates the case of the Swiss ‘Schweizerische Volkspartei’ (SVP) and analyzes its influence on the policy-making in a typical ‘radical right populist’ issue: law and order. The SVP has always been a member of the federal government and even became the first Swiss political party at the Lower House in 2003. In addition, its electoral weight was strengthened in the recent elections of 2015. To assess its influence, SVP electoral pledges (2011–2015) are qualitatively traced through the institutional arenas, thanks to a document analysis, interviews conducted with elected officials and direct observations. The study suggests that the SVP can influence policy-making in the law and order sector. However, this influence significantly evolves according to the policy-making stage under analysis. Only an indirect influence can be exercised by the SVP in order to fully translate its electoral pledges into decisions.