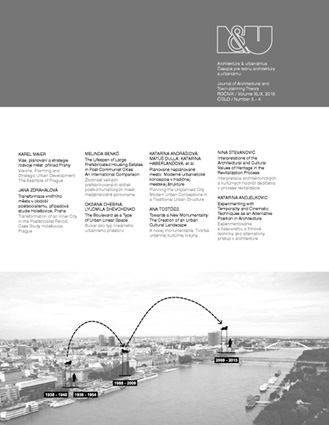 Summary/Abstract: States are born from certain visions; they are formed and legitimised by them. Cities as well form their own visions, and they attempt to project them in development concepts and strategies. In the history of Czech cities, the footprints of visions linked to strategic decisions can be noted in particular when radical changes of their functional and spatial organisation were needed. Unprecedented growth in medieval Prague under the reign of Charles IV and the transformation of Czech towns stimulated by the 19th century industrial revolution can serve as examples. Political ideas and endeavours played a key role in the process, which made its imprint on the spatial pattern of cities, the location and arrangement of edifices as symbols for temporary ideas.The political transition of 1989 initially took the stance of a farewell to ideologies and to city visions as their imprints. However, soon a new wave of visions arrived, connected to the advent of strategic planning. In the long run, strategic plans became a parallel to statutory physical planning, being less tangible and also viewed as less rigid. The example of Prague demonstrates how the originally well-grounded strategic plan from the end of the 1990s gradually came to lose its sense in the course of the process of its approval and implementation, finally declining to the level of a mere device for the support of too many controversial and questionable projects. Recently, the emerging Metropolitan Physical Plan assumed a conceptualising role, but its vision of urban “implosion” lacks wider support, being generated outside of public debate as an author´s manifesto. A new elaboration of the Strategic Plan, which was initiated by the debates on the Metropolitan Plan, has given up on any promotion of a spatial vision.The gap is widening between “top-down” visions, strategies and plans on one hand, and public opinion on the other, which strongly demands city governance that should promote citizens´ interests. Strengthening the institutional capacity of public administration is required not only to enforce and implement difficult programmes already present in existing strategies and plans, but also to face new challenges: climate change, access to resources, ageing populations and increased social barriers. A strong and shared urban vision and a strategy that manages to use the challenges and local potentials may turn to be a substantial competitive advantage.