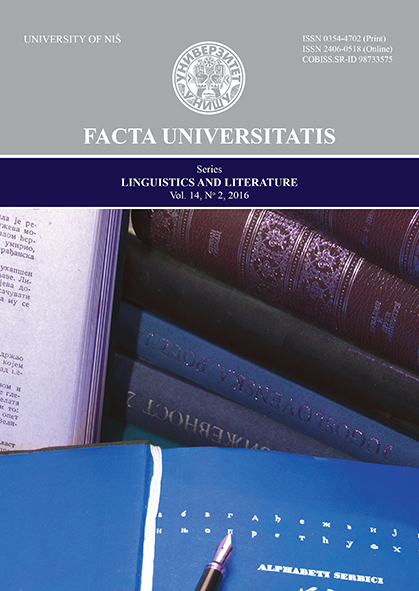 Summary/Abstract: First introduced to the study of language by Robin Lakoff in her 1975 book Language and Woman's Place, gender has gained a status of a significant variable when it comes to language realization (Frank, 1978). As such, gender is an object of many sociolinguistic studies (Jespersen, 1922; Kramer, 1974; Edelsky, 1976; Thorne et al, 1983; Crawford, 1995) and is assumed not only to play a role in the pragmatics of language usage, but also to influence the frequency and nature of different lexical and structural realizations, resulting in what Kramer termed “a genderlect” (Kramer, 1974). The aim of this paper is to present the results of a case-study of periphrastic and inflectional instances of the grammatical category of comparison in English, attempting at answering the question whether gender causes a preference for periphrasis in language usage, which, in the broadest sense, presents a multi-unit alternative to a single-unit meaning, be the meaning lexical or grammatical, and the unit a word or a bound morpheme. We analyzed a sex-wise and quantity-wise symmetrical corpus, comprised of different registers and genres – fiction, scientific non-fiction, and on-line magazine articles, encompassing a million words approximately per sex, and looked for the frequency of periphrastic instances of the two categories. Our assumption is that gender on its own, with all other social and textual variables excluded (discourse, register, author’s age and social groups, personal language background) is not a sufficient factor to unambiguously and conspicuously determine an author’s/speaker’s preference for the periphrastic form of the studied grammatical values.