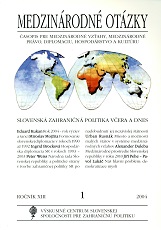 Summary/Abstract: The EU and NATO accession pose an opportunity to consider the process of Slovakia’s foreign policy and diplomacy shaping during the last decade. Independent Slovak foreign policy should be evaluated seriously, with selfreflection, critically and distance because it is at the beginning although the different one as in 1993 for world and our chance in it are changed. Slovakia’s foreign policy will face the new and demanding challenges. Based on the parliament and political parties behaviour author points out that the achievements of the Slovak diplomacy do not necessarily depends only on the capabilities of the Ministry of Foreign Affairs of the Slovak Republic as well as Slovak diplomacy and its representatives in certain countries. The professional diplomacy is strengthened or limited respectively by the quality of parliament work, the level of foreign policy discourse and the dialogue between the parliament and government as well as by completing its control task. In the article there are examples of positive and negative influence of the Slovak parliament on foreign policy and creating the foreign policy consensus. The capabilities and behaviour of the political parties in foreign policy field are also mentioned in the article. Author, using the concrete Slovak experience, proves an extraordinary important standardisation of the political parties, their interconnections to accepted European political parties and building of strong expert background including the discussions with experts from academic sphere and non-governmental organisations.