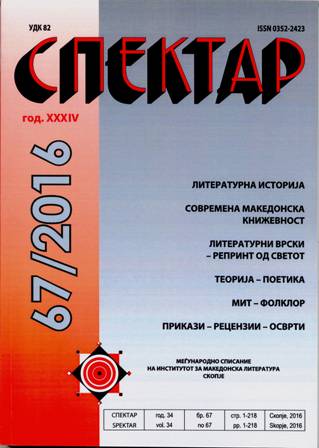 Summary/Abstract: This essay examines the relationship between style, content and reality in three chosen short stories: Paley’s “A Conversation with My Father”, Atwood’s “Happy Endings” and Kjorveziroska’s “My Friend Lile Bogomilova”. Literary studies have been dealing theoretically with the relationship between style and content. This essay, however, will focus on how the three stories analyze in practice, through their narrative technique, the issues of what creates the literary effect: style or content. More importantly, the three stories indicate that the discussions on style and content are important because they also point to the personalities of the characters (and authors) as well as to their world view and attitude to life in general. In Paley’s story, the same story-within-a-story is narrated twice with two different styles: in Atwood’s story, several different stories are narrated with the same style: in Kjorveziroska’s story, the narrator, who is a doctor who does not know much about literature, starts creating his own versions of reality. Through examining such issues, these three stories draw conclusions about the relationship of literature to reality and of reality to literature, literature’s place in the social context and the significance of the practice of story-telling, which is a largely present, even though not always recognized, aspect of human lives.