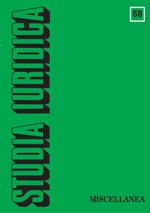 Summary/Abstract: The French Code civil entered into force in the Duchy of Warsaw at the beginning of May 1808. Contemporarily, the Law School of Warsaw was established which in 1816 became a Faculty of the Warsaw University. After the defeat of Napoleon the Constitution of the Kingdom of Poland, granted in 1815 by the Russian Emperor Alexander I, maintained tacitly the French legislation. However, the Polish law of mortgage and in 1825 the Polish law of persons and of marriage substituted the original regulations of the Code civil. This was the origin of the mixed French-Polish system of private law which remained effective in Central Poland during the whole age of the partitions. In 1831 the University of Warsaw was closed after the defeat of the November uprising against Russia. In consequence, during the years 1840–1861 the chairs of Polish law existed only at the Universities of Saint Petersburg and Moscow. During the years 1862–1869 a law faculty was active in Warsaw at the Central School (Szkoła Główna) and later at the Russian Imperial University. During all this time, as well as during the interwar period 1918–1939, the French-Polish private law remained effective. In the period 1918–1939 close relations between the French law faculties and the University of Warsaw were inaugurated. In particular Prof. Henri Mazeaud (1900–1993) served as lecturer at the Warsaw Law Faculty during the years 1931–1939. The Polish civil law was completely unified only in 1945–1946.