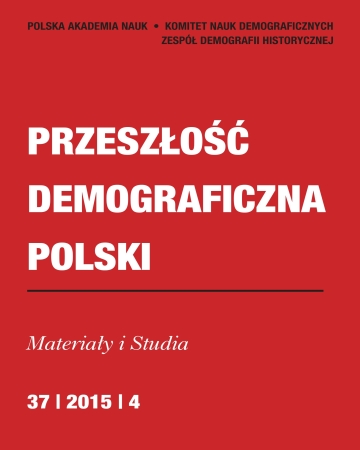 Summary/Abstract: The article presents the scale of the professional activity of women who lived in Cracow in the second half of the 19th century. The author’s intention has been to verify – at least in relation to the urban population – the common belief that before the First World War women did not take up paid jobs to a larger extent.The analysis contains the Historical International Standard Classification of Occupations (HISCO). The records of censuses of 1869, 1880 and 1890 have been the main source for the analysis; thanks to them it was possible to create a database of urban inhabitants.After having analysed the changes in the size of the population of Cracow in the second half of the 19th century the author attempted to assess what the percentage of the dynamic increase of the Cracow’s population might be accounted for by immigrants, identified through their place of birth and citizenship. The incoming population changed the structure of the Cracow’s community as far as age and sex are concerned. The majority of the immigrants were young adults, mostly women, and they were l ooking for a job. In 1869 every sixth woman that lived in Cracow was working; eleven years later – every third, and after another 10 years – nearly 40% of them. Three quarters of professionally active women from Cracow were Roman Catholic, and only one quarter – Jewish. The article also presents the structure of marital status of working women from Cracow and the type of jobs they had – according to the main groups of HISCO.It has been proved that the women did not take up jobs motivated by the war crisis; at the end of the 19th century in Cracow there were more working women than in 2012 in Polish towns.