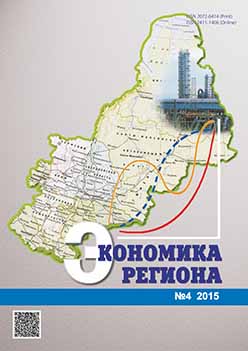 Summary/Abstract: The article investigates the integration activity of business structures in the regions of Russia. A wide variety of approaches to the study of the problems and prospects of economic integration and the current dispute on the role of integration processes in the regional economic development have determined the complexity of the concepts “integration” and “integration activities” in order to develop the objective conditions to analyse the integration activity of business structures in the Russian regions. The monitoring of the current legal system of the Russian Federation carried out in the area of statistics and compiling statistical databases on mergers and acquisitions has showed the absence of the formal executive authority dealing with the compiling and collections of information on the integration activity at the regional level. In this connection, the data of Russian information and analytical agencies are made from the information and analytical base. As the research tools, the methods of analysis of structural changes, methods of analysis of economic differentiation and concentration, methods of non-parametric statistics are used. The article shows the close relationship between the social and economic development of the subjects of Russia and the integrated business structures functioning on its territory. An investigation of the integration activity structure and dynamics in the subjects of the Russian Federation based on the statistical data for the period from 2003 to 2012 has revealed the increasing heterogeneity of the integration activity of business structures in the regions of Russia. The hypothesis of a substantial divergence of mergers and acquisitions of corporate structures in the Russian regions was confirmed by the high values of the Gini coefficient, the Herfindahl index, and the decile coefficient of differentiation. The research results are of practical importance since they can be used to improve the existing federal programs aimed at evening-out disproportions in the social and economic development of the Russian regions. The qualitative infrastructure formation of the merger and acquisition market and the development of regional policies in order to increase the competitiveness of the Russian regions can be possible on the basis of the presented analysis.