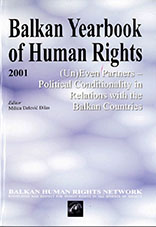 Summary/Abstract: The character of the International Criminal Tribunal for the Former Yugoslavia (ICTY) has changed three times so far. In the first phase of its existence, after it was established in February 1993, the Tribunal served as a means of making amends. The big powers felt they were responsible for failing to act in time and prevent war crimes committed in Croatia in 1991 and in Bosnia in 1992. All war crimes committed during this period were subjected to strong condemnation by the international public, which also expressed outrage over the failure by the big powers to prevent them, although they had had the military capacity to do so.

Haški tribunal i političko uslovljavanje The Tribunal at the Hague and Political Conditionality 2001 Srbija u vreme i posle Miloševica Serbia During and After Milosevic 2008 Političke institucije i ekonomska politika: empirijski nalazi Political Institutions And Economic Policy: Empirical Findings 2011 Racionalnost i politika: jedan mogući način izvođenja koncepta politike Rationalism And Politics: A Possible Derivation Of A Concept Of Politics 2011 Serbia after the May 2012 Elections Serbia after the May 2012 Elections 2012
2020 © CEEOL. ALL Rights Reserved. Privacy Policy | Terms & Conditions of use
ICB - InterConsult Bulgaria ver.1.3.1217