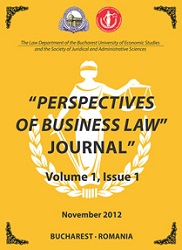 Summary/Abstract: The notion of shareholder stirs theoretical and practical concern. The traditional qualification criteria – the contribution, affectio societatis, participation to profit and loss, the power of intervention in the social life – prove to be useless when facing particular situations. The usufruct of shares and the state of contribution in kind involving common goods of the spouses confuses the notion of shareholder. The conclusion is that we are witness to this notion’s fall, which can be brought to a stop by means of legal or contractual mechanisms.