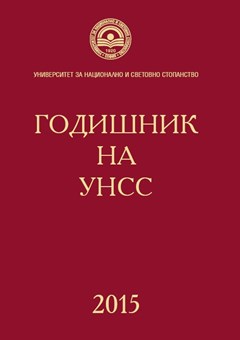 Summary/Abstract: In the center of this text is the creation and development of new civilization model in the Bulgarian national psychology from the end of the 20 century and the beginning of the 21.He is based on neoliberal economic and social doctrine, situated on postmodern paradigm about profit, hedonism and alienation. The text Is dominated by validation of user advisory attitude, which is transforming in negative plan the traditional Bulgarian customs like patriotism, hardworking, solidarity, hospitality, justice, willingness to learn and respect to family traditions, aside from that there is rearrangement to the moral system which commercialize all fields of the society .The community is full with well-known vices like lust for power, corruption, greed, hatred, selfishness, etc. all this things damage main parts of the Bulgarian national character and raise the scale of the Bulgarian national psychological defectology. The main factor for this bad metamorphosis is the switch of the so called „change“. Instead of development to rational, enterprising capitalism, the Bulgarian political elite pushed the country to irrational, criminal capitalism, in which the profits aren’t from hardworking and creativity, but from stealing and specula. In result-poverty, ignorance, and soul emptiness. From here is impossible in the current moment big part of the Bulgarian population to live well and worthy, as the respectable European people that they are.