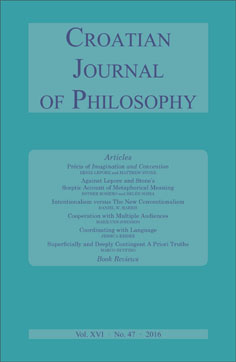 Summary/Abstract: Steven Pinker proposes a game-theoretic framework to help explain the use of veiled speech in contexts where the ultimate aims of the speaker and hearer may diverge—such as cases of bribing a police officer to get out of a ticket and paying a maître d’ to get a table. This is presented as a response to what Pinker sees as the failure in H. P. Grice’s infl uential theory of meaning to recognize that speakers and hearers are not always cooperating. In this paper I argue that Pinker mischaracterizes Grice’s views on cooperation, and use this to refine a positive picture of what sort of cooperation is demanded by Grice’s Cooperative Principle. This positive picture serves to insulate the Gricean framework from objectors— including Pinker—who overstate the obligations entailed by the adoption of the Cooperative Principle. I then argue that the cases Pinker presents are best treated by recognizing that in each instance the utterance is formulated with two intentions towards two different audiences and detail a resulting revision to Pinker’s game-theoretic framework that reflects this proposal. I conclude by demonstrating how this proposed game-theoretic framework of cooperation with multiple audiences can be used to model the costs and benefits of other types of discourse, including political speech.