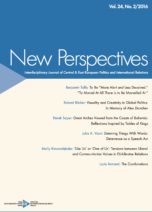 Summary/Abstract: As ColdWar historians and fans of the film Doctor Strangelove know, deterrence can be atricky business. The complexity of deterrence and the lack of attention that has been paidto its social effects have too often left one of its forms – nuclear deterrence – depoliticized,uncontested, and thus a danger to us all. I argue in this article that speech act theory can provide insights into deterrence and its concomitant political effects. It can be used to philosophically explain the communicative difficulties involved in deterrent relationships, and to form a basis for a critical stance on deterrence as politics. This entails a shift of focus from deterrence as a state of mind to the politics of deterrence and the deontic powers it wields – a shift from the causative aspects of deterrence to the deontology of deterrents. The analysis of such political functions is aided by the neologism of deterrentification,which refers to assertive and declarative acts that alter the status functions of things so that they are thought to act as deterrents and bring about determent in someone or something.It also aids in conceptualizing how the status of deterrents can be cancelled, and how nuclear weapons can be drawn away from the exceptional sphere of deterrence and back intothe sphere of politics. Such a status transformation is required to achieve a sustained nuclear disarmament.