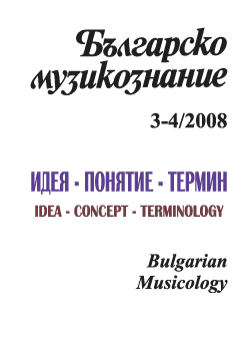 Summary/Abstract: The book of Rossitsa Draganova is dedicated to the contemporary idea of performance and the scientific disclosure of a specific subject expressed in the characteristic terminological replacement of „performance“ with „music-making“. In this way she reveals diachronically (over the historical stages since mid-19th.century up to the present moment) and synchronically (in terms of co-existence and interconnections) the status of the Bulgarian musical culture. In a contemporary context, the phenomena that Rossitsa Draganova analyzes are connected both with the so called art music – compositional creativity, authorship and the musical work – as well as to the dynamic fields of traditional music and contemporary popular culture. At the text’s center lies the expanded understanding of music-making in musical modernity – a particularly topical subject that outlines fields that are different in character and function and that are examined in a unique parallel. They are fundamental to the paradigm shift in various musical practices that is currently taking place. Three aspects of the terminological replacement of „performance“ with „music making“ are identified: the classical paradigm and contemporary views on these concepts in Chapter 1 „Performance and Music-Making – a Classical Paradigm and Modernity”; music-making and the modelling of musical-cultural development in Chapter Two „Music-Making and Models of Musical-Cultural Development”; and music-making and the analysis of processes in musical pedagogy in Chapter Three „Music-Making and Primary Education in Bulgaria – Contemporary Practice and a Change of Paradigms.” The book synthesizes Rossitsa Draganova’s many years of experience working on this research problems, which reveals the complex processes of transformation in musical culture. Her work in this area is also based on large pedagogical experience, giving opportunity for cognitive observations which she transformed in subjects of serious and rigorous analysis. The study is the first of its kind in music theoretical literature in Bulgaria. It is based on the analytical use of literature in many languages covering many issues and situates itself within the wider discourse of international musical sciences. The author’s ideas have been actively submited in academic forums. The book is an accomplishment – not only due to its innovative and topical examination of the subject matter, but also for the maturity of the academic interpretation realized within the highly problematic sphere of the musicological and humanistic disciplines.