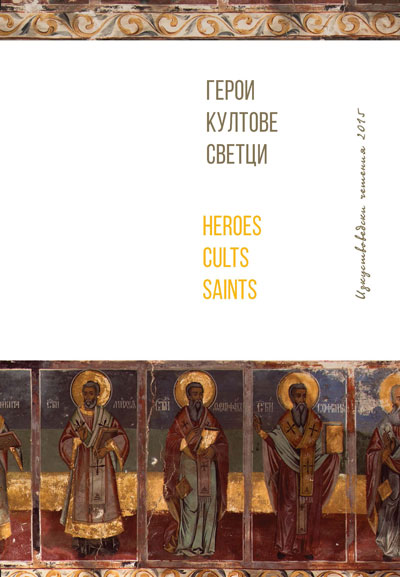 Summary/Abstract: The frescoes on the northern wall of the nave of Saint George’s Church in Veliko Tarnovo date from 1616. In the topmost register, a frieze of the images of thirteen bishops in full length has been preserved. Previous publications on the frescoes differ with regards to the saints’ identity; in the current text we aim to add to or correct these previous identifications. At the same time we offer a possible explanation for the presence of such a great number of saint hierarchs’ images outside the altar, in the nave of the temple. This is a rare feature, typical for a limited number of mural monuments that were created within three decades. Together with the frescoes at Saint George’s six examples in total exist: the frescoes in the Kurilo Monastery (1596); Seslavtsi Monastery (1616); the second layer of frescoes in the Dragalevtsi Monastery (the end of the 16th and the beginning of the 17th century); besides the frieze in Dobarsko (1614), a similar frieze can be found in the monastery church in the village of Zhurche, Demir Hissar region (1617). Even more rarely such lines of bishops are positioned in the narthex of some monasteries: Holy Trinity Monastery near Plevlya (1592), Podgumer Monastery (1596), Ilientsi Monastery (end of 16th and the beginning of 17th century), as well as in the narthex of the Saint George’s Church in Veliko Tarnovo (first half of the 17th century).