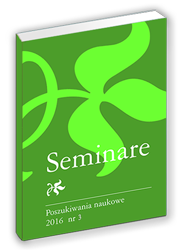 Summary/Abstract: This article aims at depicting the figure of Cardinal Bolesław Kominek, archbishop of Wrocław, as a great supporter of Polish-German reconciliation. As a pastor of the Upper Silesia, he perfectly felt the soul of both Polish and German nations. As archbishop of Wrocław he pursued with determination the approchement of Polish and German nations in a spirit of reconciliation and Christian forgiveness. His consequent activity led to the recognition of the border on the Oder-Neisse line as well as to the recognition of the Polish Church administration on the territory of the Western and Northern Lands (or the Recovered Territories). He can be considered as one of the founders of the idea of united Europe.