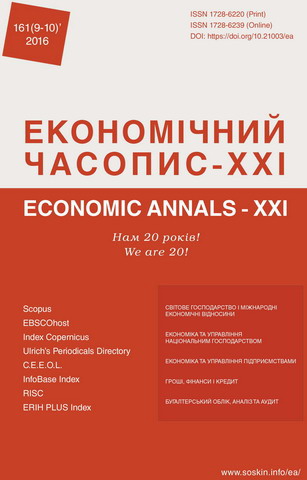 Summary/Abstract: Introduction. Negative effects of the global economic crisis, contradictions of social and economic policies of Ukraine caused by insufficiently effective reforms and frequent changes in Ukraine’s legislation have led to numerous problems in the field of budgetary relations, including the excessive centralisation of budget funds, increasing public debt, insufficient provision of sources of real income for delegated local authorities, etc. These problems can be solved by means of the declared fiscal decentralisation. Its implementation will help to strengthen the financial basis of the local self-government, improve the social and economic situation and provide an increasing number of jobs and decreasing migration. The purpose of the paper is to evaluate the process of fiscal decentralisation and the changes, caused by it in relationships between budgets due to the delineation of expenditure responsibilities and sources of income in order to compare the obtained and expected results. Results. The main disadvantages of fiscal and tax reforms have been defined as follows: rapid implementation without proper substantiation and preparation; incomplete sectoral reforms and administrative-territorial reform that would precede the budgetary reform; increasing centralisation of budgetary funds despite the declared fiscal decentralisation; the handover of power from public authorities to local authorities without proper financial provision. In order to implement real fiscal decentralisation it was proposed to provide conditions for people’s active self-fulfilment when they set up their own business, promoting the increase of revenues into the budget; to ensure the delegated rights on expenditures of the amount of designated financial resources alongside with the handover of power from public authorities to local authorities; to improve the order of calculation of basic (reverse) dotation with the possibility of its adjustment due to the objective circumstances; to review the revenues of the local budgets in order to increase local revenues and reduce transfers from the state budget. Conclusions. Having conducted this research, a conclusion was drawn about insufficient effectiveness of the budget and tax system reforming, intergovernmental fiscal relations and declarative nature of many activities of fiscal decentralisation.