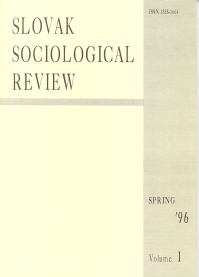 Summary/Abstract: The question of the identity of the intelligentsia, and especially of intellectuals, is traditionally complicated in the context of frequent radical ideological changes in multinational states of Central Europe. The most significant attempt in modern history to change the social status and social identity of the intelligentsia was carried out in the name of Marxist ideology under the dictatorship of the proletariat. In Czechoslovakia after 1948, the intellectual elite was systematically liquidated, and the role of "appendage to the working class" was ascribed to "members of the working intelligentsia". Presumed consequences of the enforced changes are discussed predominantly in the frame of Tajfel's theory of identity and Moscovici's definition of nomic and anomic social groups. Empirical data are based mainly on content analysis of discussion which occurred among distinct intellectual minority just before the parliamentary election in 1992 in which they lost their political power. As a complementary method it was used a questionnaire which consisted of six open, and six semi-opened questions, and four open-ended sentences. The specific items related to intellectuals' own definition of their social identity, to the status and roles of intellectuals in society, to the mutual expectations of intellectuals and the public and finally to the typical characteristics of the intellectuals. Both method, content analysis of discourse and questionnaire, indicated that the meaning of concept INTELLECTUAL was typically constructed in individual personal terms. They distinguished themselves mainly from the other members of the intelligentsia by their non ideologically biased attitudes and by their exceptional intellectual qualities. In majority, intellectuals do not relate their individual identity to the identity of an intelligentsia in general. Contrary, their evaluation of Slovak intelligentsia was strongly negative. It was found that two predominant points of discussion are in contradiction. On the one hand there was identified high estimation of own qualities and on the other hand there was admitted failure in politics. The Idea of the incompatibility of the "intellectual" and "power" was suggested by intellectuals as the most probable explanation of their failure in politics. The interpretation is discussed in terms of its acceptability for intellectuals, especially in relation to their need to preserve their own distinctive personal identity.