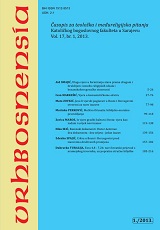 Summary/Abstract: This article deals with two important documents. The first is Pastor Aeternus, in which Vatican I defines the doctrine of infallibility and explains the “primate” concept of the Roman Pontiff. The second is the so-called “Ravenna document”, written by a mixed international commission for theological dialogue between the Catholic Church and the Orthodox Churches. These two documents represent two worlds, two directions, that converge in the documents of Vatican II and merge in a single challenge – the question of the unity of the Church, which remains a crucial question today.