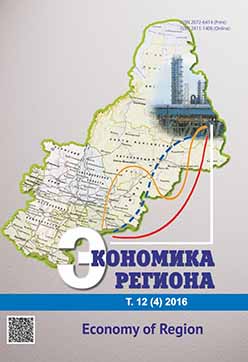 Summary/Abstract: The article is devoted to a current problem of regional development, such as the regulation of labour migration. In the article,the causes of the inefficient use of labour resources are identified and the solutions to reduce tension in the labour market bothat the state level and at the level of an individual employee are proposed. The formal rules and informal constraints that have asignificant impact on migration are allocated. The institutional support for the regulation of migration in Russia is considered.At the level of the entities of the Russian Federation, the analysis of migration flows for the period from 2012 to 2014 is carriedout; the entities of the Russian Federation are grouped according to the degree of the influence of the indicators of the naturalmovement and the migration of population as well as to the qualification structure of migrants (professional education, agestructure). The basic imbalances in the labour market in the entities of the Russian Federation are revealed. The authors haveproposed a model for assessing the attractiveness of workplaces based on the objective indicators of the development of Russianregions presented in the statistical report of Federal State Statistics Service. A feature of the model is the ability to determine themain factors influencing the attraction of labour resources to the region. The methodological tools of the research include themathematical methods of processing statistical data. Testing of the model is conducted for the Federal districts of the RussianFederation. According to the developed model, the coefficient of the attractiveness of a workplace in 2010 and 2014 for allFederal districts of the Russian Federation is calculated. In the article, the legal framework regulating the flow of the humancapital is also analysed. The assessment of the implementation of the state program of support for the resettlement in the RussianFederation of compatriots residing abroad is given