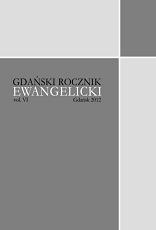 Summary/Abstract: The beginning of the 16th century in western Christianity’s history was marked by the appearance of its third tendency, i.e. the Protestantism. In its two main confessional variants (Lutheranism, Calvinism) the protestant theology phrased different models of understanding of a church. The Lutheran ecclesiology was defined in The Augsburg Confession, Art. 5: “That we may obtain this faith, the Ministry of Teaching the Gospel and administering the Sacraments was instituted”. Teaching the Gospel and administering the Sacraments are thenceforth notae ecclesiae, i.e. constitutive marks of a church. In the 16th century and later the bond between autonomous, national Lutheran churches had only a spiritual character. Bringing the Lutheran World Federation to life in 1947 was a result of a long process of looking for a deeper bond between the Lutherans all over the world. LWF’s ecclesiology was developed on consecutive General Assemblies. In 1984 in Budapest the member churches’ delegates accepted the “pulpit and altar fellowship”, understood as a principle of membership and relations between LWF’s member churches. 1990 the Assembly in Curitiba (Brazil) introduced a change to the status, describing the Federation as a communion of churches. In the 21st century the communion of Lutheran churches is based on the Reformation’s idea of spiritual communion of believers, gathered around the common teachings of Gospel and altar, aiming at closer cooperation in the world, with advanced autonomy and possibility to formulate opinions independently or to continue local traditions. It is a completion of Reformation’s ecclesiological vision and an alternative model to integralist visions.