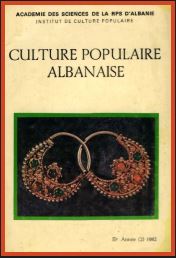 Summary/Abstract: The epic genre with a historical subject represents one of the richest subdivisions of Albanian folklore, one of the most original and important areas of national popular culture. As such, it has not failed to attract the attention of folklorists and has been reserved for it the main place in their collections. We see it from the oldest to the most recent collections, that is to say from the Manuscript of Chieuti (1736), the publications of Girolamo de Rada (1866), of Zef Jubani (1871), of Thimi Mitko (1878), Spiro Dine (1908), up to those of the Treasures of the Nation (1937-1944) and the materials published after the Liberation of the country (Le chant populaire, 1955; the volumes of historic popular songs , 1956, 1962, 1967-1968, etc.; the volumes of chansonniers of the Anti-fascist National Liberation Struggle and Socialist Construction, 1951, 1961, 1966, 1968, 1969, 1971, 1976, and others). Epic chansonniers were also published by foreign folklorists such as Auguste Dozon (1879), Gustav Meyer (1896-7), Maximilien Lambertz (1917), and many others.