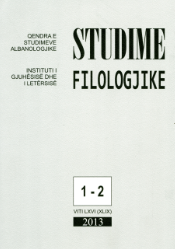 Summary/Abstract: The novel '"Wedding” is a very important part of the work of the literary system of Ismai! Kadare. In terms of the content and its topics, it is related to several other works of Kadare, such as “Broken April” which treats canon and revenge, and “The Three -Arched Bridge”, which treats the motive of the sacrifice during building the three -arched bridge. Seen from the formal perspective, uThe Wedding” has a perfect structural organization that gives us ample opportunity to study philology. The publication of this work has similarities with some other novels of the time: we are talking about those works published first in the literary journal twNëndori”, like the novel “Lumi i vdekur” (“Dead River”) by Jakov Xoxe). We take in consideration the different estimation about Kadare’s work, as athe whole and in particular about the novel uThe wedding,” made by the author himself and by several authors so far, such as Shaban Sinani, Arshi Pipa, Martin Camaj, Elio Miracco, Matteo Mandala. There are five variants of the novel uThe wedding” that we have taken in consideration here, as follows: The first variant, published in the Albanian journal “Nëndori” (Tirana, 1967); the second variant, published as a separate book, (Tirana, 1968); the third variant included in the book "Gjakftohtësia" (Tirana,1980); 4) the fourth variant, published by the publishing house FAYARD (Paris, 2000); the fifth variant, published by the publishing house uOnufri”, Tiranë, 2008. We have tried to make a short description of the publication and also we tried to analyse the importance of the variants of the author, in order to determine the place of this book in the whole system work of Kadare and in Albanian literary system. The study of the variants helps us to see clearly the author's interference, his troubles. his efforts, his performance in writing, his creativity and his intellectual performance during the 60s of last century, to know better Kadare’s literary system.