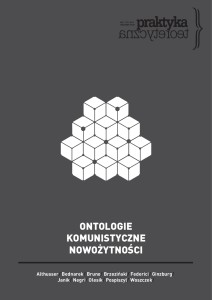 Summary/Abstract: The fragment of The Underground Current of the Materialism of the Encounter presented below offers a draft of philosophical trajectory named „Materialism of encounter” or „aleatory materialism”. Its characteristic feature is the focus on contingency of preliminary constellation that organizes the very possibility of an event and its duration. The text takes as its goal the critique of the philosophical tradition that sees in materialism merely a negative of idealism that duplicates its structure and logic. The text starts with an analysis of philosophical consequences of Epicurean atomism and moves towards the discussion of a recurrent theme of void and contingency of the origin appearing in the works of such authors as Machiavelli, Spinoza, Rousseau, Marx or Heidegger. The Underground Current of the Materialism of the Encounter was published posthumously, and is based on materials that were supposed to become a basis of an unfinished book by Louis Althusser. The translation was possible thanks to courtesy of l’Institut Mémoires de l’édition contemporaine (IMEC).