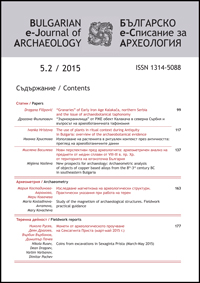 Summary/Abstract: Botanical remains from sanctuaries and necropolises provide valuable information about ancient religious prac¬tices. The current paper discusses old and new archaeobotanical data from Bulgaria and the use of plants in ritual context from Antiquity. The time span of the 44 considered sites (sanctuaries and necropolises) is between the 6th century BC and the 3rd century AD. Most of the sanctuaries in Bulgaria, where archaeobotanical remains have been studied, date to the Bronze and Iron Ages, and a large proportion represents the so called “pit fields”. Information concerning later periods is almost completely lacking. Some evidence on plant offerings is available from the necropolises of the Hellenistic and Roman periods. Although the archaeobotanical data from these sites are quite scarce, their increasing number allows the observation of some common tendencies. Cereals and pulses are most commonly identified at sanctuaries, while fruits are typical remains in the necropolises. Very often imported species (like stone pine, pistachio and olive) are found which testifies to existing contacts with adjacent regions (mainly the Mediterranean area and North Africa).