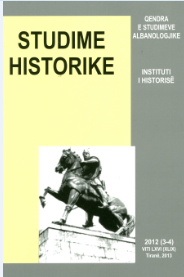 Summary/Abstract: As Cesar and Pompey could not sort out their contradictions through mediations, they turned to arms. The struggle between the two, took place in the Illyrian territories which became the battlefield between the two most powerful people of Rome of the lst century BC., more specifically in 48 BC. Initially it was Pompey who came to Illyricum and after him Cesar, who took note of all the events that took place there, making thus the third book of his works to have a special importance for the Albanian studies. The lack of works firom native authors increases the importance of Cesar’s writings, who in his limited lines gives valuable information on the ancient history of Epirus. In several of its 112 chapters, the third book gives data on Epirus and some of its towns. The aim of this article is to highlight the information obtained from this work, which has been enriched with other sources of earlier and later authors. We consider that these data are of a great importance for the Illyrian studies, as a part of the Albanian studies, in order to better understand and highlight the ancient history of the territories where our ancestors once lived. Names of places and areas such as: Epirus, Palceste (today Palasa) in Himara, are remembered in history for the importance they had for the roman general during his landing and are not mentioned by any other contemporary apart from Lukan. Likewise, the name Cerauniorum (terra Cerauniorum - in plural) which in earlier publications was named terra Germiniorum meaning the territory of Germins, testifies for the presence of an ancient tribe among the large tribe of Kaons, where Palasste, Palasa of Himara was situated, and also giving a more clear and precise account of the Illyrian tribes and the continuity of Illyrian names inherited by the present day Albanians. This first part of the article is also complemented by other earlier, contemporary and later authors and sources such as Tuqiditis, Strabonis, Skylaks, Diodor, Apiani, Dion Kas, Apollodor, Skymni, Tit Liv, Lukan, Plin, Flori, Horacio, Ange Masci, Mommsen, Hahn, Pukvill, Hezei, Hammond, Çabej, H.Ceka etc.