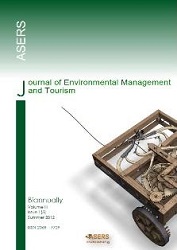 Summary/Abstract: The travel and tourism sector have a strategic contribution to the Indian economy providing several socio-economic benefits. Right form employment generation, foreign Exchange and income generation the sector supplements other industries which overall contributes to GDP of the country. India is a country of worthy culture, natural beauty and reservoir of ancient portrayal which attracts foreign visitors. The history of the country reveals that there have been the globalization phenomena in the form of trade and commerce due to its various attractions bestowed as inherent prospects which nonetheless could be regarded as tourism. All the transaction where done through yellow metal and as a result the country got the fame of golden bird. The yellow metal is now transformed into different foreign currency exchanged by the foreign visitors. Presently the country is embodied with wonders of the world, ancient art and culture, nature dispersed across the nation dwindling within twenty-nine States and seven union territories. Jharkhand is amongst one of them contributing to tourism sector and global image of the country. The paper is an attempt to examine the prospects of Jharkhand Tourism and its contribution to the economy of the state.