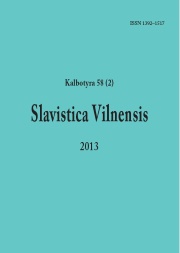 Декоративные вербы в западной Беларуси и восточной Литве во второй половине ХХ–начале ХХI вв.
The decorated verba in Western Belarus and Eastern Lithuania in the second half of the 20th and the beginning of the 21st century

Summary/Abstract: Various consecrated symbols play a special role in folk culture and folk religion. In the Christian liturgy, the verba (palm) is a symbol having a concrete religious meaning. In the second half of the 20th century, in Western Belarus and Eastern Lithuania, a tendency to consider verba from the aesthetic point of view emerged. An exceptional case among the verba (between Belarusian, Russian, Polish, and Lithuanian believers) are the decorated symbol, which may be called palm-shape verba. Amongst the believers of Belarus, regardless of confession, the decorated verba (with flowers) has become a symbol of the contemporary religious identity. Verbas with decorations in Eastern Lithuania are more popular amongst Polish believers; in Western Belarus, they are blessed regardless of confessional and nationality differences. In the beginning of the 21st century, three main variants of palm-shaped verba may be found. The first variant is made from willow or juniper twigs decorated with dry and green flower blossoms (or the twigs of both trees are used together). The second and very popular decoration variant is artificial flowers attached to a willow twig. In the third variant, the blossoms made from threads are arranged along the whole length of a willow twig. An exceptional case among the decorated verbas in Eastern Lithuania are the Vilnius verba. This variant of decorated verba first appeared at the start of the 19th century in the surrounding areas of Vilnius. Originally, these verbas were associated with the Polish religious and folk culture of Southeast Lithuania. In the second half of the 20th century, the Vilnius verbas were strongly linked with the Catholic Lithuanian and Polish folk culture of the Vilnius region, but have not been popular amongst the believers of Belarus. Considerable differences may be noticed in the scope and content of decorative elements in the verba of Lithuania and Belarus. In Lithuania, decorated verbas are more popular among urban Catholics. Thus, verba reveals the diversity of the Christian tradition, which comprises the exceptional features of the contemporary folk religion in Eastern Lithuania and Western Belarus. Through the link between the verba and the ethnic and confessional communities, these variants of the symbol become an important identity-forming factor for the inhabitants of Western Belarus and Eastern Lithuania in the second half of the 20th and the beginning of the 21st century