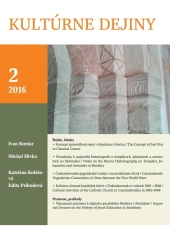 Summary/Abstract: At the end of November of this year the classical philologist, Neo-Latinist and university pedagogue, Daniel Škoviera, celebrates his 70th jubilee. He was born on 30 November 1946 in the village of Mikulášová near Bardejov. He comes from the family of a Greek Catholic priest who in the 1950s was persecuted by the communists and displaced to Bohemia. After that a period of frequent moving began for the family. In 1963 they were again allowed to return to Slovakia.Daniel Škoviera completed his studies at the secondary economic school and thanks to lucky circumstances he went to study Latin and French languages at the Comenius University in Bratislava. After his graduation he stayed at the university and he also taught at a secondary grammar school. Despite his pedagogical abilities, as late as until 1989 he could not teach due to his origin and the political situation. Instead, he worked at the Department of History and Theory of Journalism at the Faculty of Arts CU.After the Velvet Revolution he returned to the Department of Semitic and Classical Philology. He also taught Greek at the Roman Catholic Theological Faculty and at the theological institute Aloisianum in Bratislava. In 1992 he was awarded venia docendi. In the same year he belonged to the group that restored the Trnava University, inter alia with the intention to rehabilitate classical languages. From its restoration up to 2014 he worked at this university as the head of the Department of Classical Languages. In 2004 he was appointed professor of classical languages.In his long research and teaching career Prof. Škoviera has dealt with the writings of Christian antiquity and the literary texts of Neo-Latin period. With the total number of more than four hundred publications he is rightly ranked as one of the important personalities of the cultural history of the post-November Slovakia.