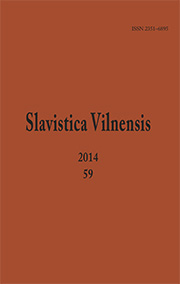 Summary/Abstract: Language constitutes an important part of identity; therefore, a definite relationship can be established between the stages of development of the national language and forms of identity. The formation and development of the Slovenian national language, starting in the late seventeenth century, during the period of National Awakening, and of Slovenian national identity can be divided into six stages or periods, all of which saw the social functions of the Slovenian language change. In the 1990’s, emphasis on Slovenian national identity reached its peak, at the same time that the effects of globalization became noticeable in Slovenia, increasing the attention of the Slovenians to their regional and local particularities and the diversity of their local dialects. The article focuses on the different forms of national, local and regional identities that have emerged during this period in Slovenia.