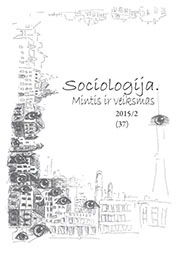 Summary/Abstract: This article presents the data of value surveys conducted in 1990, 1999, 2005 and 2008 in Lithuania with the focus on postmaterialist value change in fragile social, political and economic context. As the data prove, value orientations of the population are not clearly formed and consolidated as they change quickly reacting to momentary economic and political situations. The most unexpected was the fact that at the moment of the fastest economic growth of the country the highest level of respondents with materialist orientations was recorded in Lithuania. The distribution of these value orientations among society and their dynamics, as well as their relationship with associated attitudes is also hardly explained by postmaterialist theory. All this suggests that postmaterialist values orientation is not an organic and relatively stable part of personal values system, which brings together and determines other attitudes. It reflects not so much the deep-rooted values but rather instant judgments related to very specific problems that actualize in specific social and economic situations.