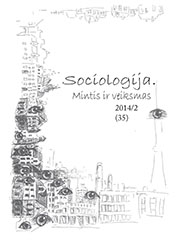 Summary/Abstract: The article examines the concept of the political, and it’s relationship to the Late Soviet Socialism, adressed in the Sovietology oeuvre of Proffesor Alexei Yurchak. The question is raised whether the claim about inner paradoxes of the late Soviet system as a single discursive formation can be substantiated without addressing the probability of more fundamental discursive divisions, splits and multiplicities structuring life of the post-Stalinist epoch. The critical analysis of such concepts as „authoritative discourse“ and discursive „performative shift“ reveals contradictions of author‘s conceptual attempt to explain the legitimacy of the late Soviet system, as well as elucidates why the issue of the Soviet as the political remains suspended in the analytical shema of Yurchak.