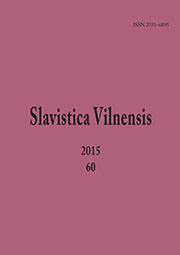 Summary/Abstract: The interest in I. Lutskevich Kitab has been taken since its discovery in 1915 in Keturiasdesimt Totoriu village. Several articles about this Kitab were published in local and foreign press. Each article that represents the content of the manuscript contains short fragments of transliterated text. The whole text of the manuscript together with facsimile and translations into Lithuanian and Russian were published in 2009 in the book called “Kitab of Ivan Lutskevich — Lithuanian Tatar cultural monument”. The Belarussian inscription in I. Lutskevich Kitab lets assume that this manuscript was created before the end of Tatar language assimilation process. At that moment, there were already such Tatars who were not able to speak their native language, but were fluent in Belarussian. Therefore, the cultural value and significance of the manuscript has increased not only among the specialists, but among those who are simply interested in it as well. In this article, the attention is paid to the stages of the research of the manuscript and its exclusive content that allows us to entitle the manuscript as peculiar The Tatar-Muslim Catechism. Most of the Kitab’s texts are found in another manuscripts as well. Among the most relative manuscripts regarding the content could be mentioned A. Karickis (middle of 19th century) and London’s Kitabs (1831). The analysis of all the published catalogues of manuscripts in Slavic but with Arabic characters brings the possibility to select the ones that contain analogical texts. Comparison and analysis of such texts would be a great material for further textological researches. Among researches that were exploring I. Lutskevich Kitab, Ivan Lutskevich, Jan Stankevic, Anton Antanovic, and Galina Miskiniene have to be mentioned in particular.