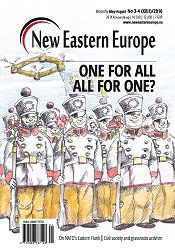 Summary/Abstract: Not since the Cold War has the security of Central and Eastern Europe been as under threat as it is now. Without question, the greatest challenge facing the region is the fact that Russia currently appears more willing to use force. The economic crisis in that country, combined with growing levels of nationalism among both the society and the elite, has the potential to form a dangerous combination. However, to successfully deter Russia, the American protective umbrella on its own will not be sufficient.