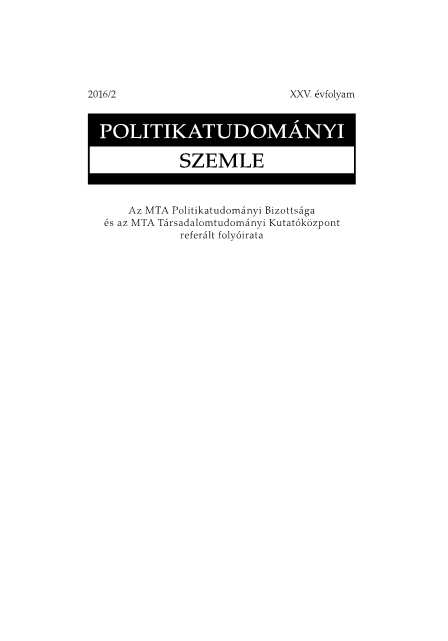 Politika a spektákulum korában
Politics in the Age of the Spectacle

The Crisis of Guy Debord’s, Jean Baudrillard’s and Douglas Kellner’s Appearance and Reality Model of Ideology

Summary/Abstract: According to the starting point of the paper the problematique of the ‘crisis of reality’ occupies a central place among the causes of the growing uncertainty of radical social criticism today. One of the number one pillars of radical social criticism has been the model of appearance and reality of ideology in political theory. Accordingly appearance was an ideological concept: originally it meant those experiences, thoughts, images and senses on which the illusions of the given age are built about itself; and they played an important role in the maintenance of hegemonic and unjust social, economic and political conditions. This approach had acquired great popularity even in circles of the broader intellectuals in social sciences as well as in theories dealing with politics. Its attractiveness was due to the fact that the hopes of radical politics were also linked to intellectually mapping reality and to its strength in exposition, namely to the assumption that sooner or later the facts and processes of Reality written in capital letters would break up the rule of the ‘reality of appearance’, the common social illusion built in the name of appearance. During the past decades the attractiveness of the appearance-reality model of ideology has spectacularly decreased in social sciences, which I think has three reasons. First: the epistemological scepticism of the post-modern in relation to the possibility of fully discovering reality. Second: the interpretative turn in social theory which has placed the analysis of discursive and imaginary and meaning formations ‘independent’ of reality, in the centre of the theory of ideology instead of the covering up and construction of reality. In the present paper I wish to focus on the third major component or the growing uncertainty of the appearance- reality model of the criticism of ideology. Accordingly the general faith in the strength of exposition was lost, in other words the conviction has become stronger that ‘something had happened’ with reality in late capitalism/post-modern societies. In this writing I wish to present the theoretical innovations of Guy Debord, Jean Baudrillard and Douglas Kellner in connection with the issues of reality becoming problematic. I am in quest for an answer to the question how the relationship of reality and appearance can be reworded according to their ideas. The paper primarily concentrates on the aspects of political theory of their writings: according to the main thesis of the paper the primarily objective of Debord, Baudrillad and Kellner was to make the appearance-reality model of ideology suited to help understand the processes and operations of politics in their own age, and to lay the new foundation of radical politics possible on its basis.