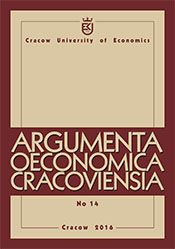 Summary/Abstract: This paper explores the combined impact of tight monetary policy, government debt, budgetary deficit, financialisation, and financial leverage on the fixed asset investment (FAI) of non-financial private firms in EU countries in the 1999–2014 period. I estimate eight static fixed-effects models and test for six hypotheses. While inconclusive regarding the combined impact of tight monetary policy and government debt, the results suggest that the influence of monetary policy was limited only to the euro area, suggesting that national monetary policies were inconsequential with regard to changes in FAI. Despite the detrimental effects of financialisation, the findings highlight that cash flows generated from the sector’s financial assets might serve as an internal source of FAI funding that strongly correlates with monetary contractions. The findings also highlight the possibility of an active balance sheet channel. However, given the macro-level character of the data, further research on the micro-level might provide more insight into specific issues.