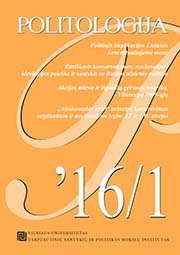 Summary/Abstract: In the global society, different cities accommodate the same agendas of urban actions and movements often travel. In the post-Soviet urban life, for example, one could notice the formation of some new traditions reflecting human rights movement, as the LGBT parades became important events in Vilnius over the past six years. Yet the dominant theoretical frameworks aimed at social movements and urban protest tradition do not always help to understand the new public indignation caused by the austerity policies triggered by global financial crisis. This paper, therefore, looks at the specific characteristics of the Lithuanian post-austerity situation and analyses the dynamics of local political fears. The article analyses how urban events get interpreted in the Lithuanian media by politicians, experts, media representatives, activists, and public intellectuals. The rhetoric of a riot threat here is associated not so much with the intentions of protest organisers but with the external political tensions. Famous politicians, journalists and other public speakers hold some beliefs about the events in the city, which are shaped by the administrative laws as well as the general geopolitical orientation of the country (influenced by the new Russian aggression). A violent event in Vilnius (riots near the Lithuanian Parliament in 2009 January 16) is chosen as a symbolic point of departure for the discussion about the interpretation of the subsequent events that became seen in the local media with rising suspicion, suggesting the possible “foreign meddling”. In the beginning, the article shows the new understanding of some public intellectuals that the Lithuanian domestic politics is becoming “authoritarian again” (ostensibly similar to the Soviet state). The greater activity of civil society and Western integration also caused some troubles for the authorities (approximately since 2010), since it became harder to coordinate various new types of public events in Vilnius (such as numerous marches, commemorating gatherings and protests). Later, by singling out some public speculations in the media about the possible riot threat, the article discusses legal and symbolic boundaries of some events. The conclusion is made that in contemporary Lithuanian media, social demands are interpreted in a rather contrasting way. Some politicians, but also famous journalists etc., see those demands and ensuing protests as a threat to a small country’s social and political integrity or even national security. While other public speakers see the same demands and legitimate public protests as a desirable (although, unfortunately, wavering away) feature of a “normal” democratic society.