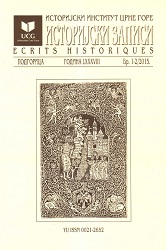 Summary/Abstract: This paper analyzes the influence of political and social changes on language as a means of social communication in Serbia/Yugoslavia within the first few years after the World War II. In addition to the general linguistic changes which were indicating the altered social relations, as well as emphasizing the new values, this paper also discusses the changes that occurred between and within the political and social groups. Special attention is given to the reaction of the Serbian middle class (bourgeoise) members pertaining to the linguistic changes, being themselves “sentenced” to „disappearance“ in the new structure of society and in the times of radical changes. Ultimately, the linguistic changes led to the altered state of consciousness and the creation of new societal identity.