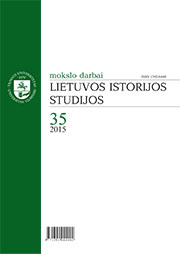 Summary/Abstract: The article “The Consequences of the WWII in the Memory Culture of Lithuania: Contexts, Evaluations, and Tangles” seeks to disclose tendencies and problems in a political, academic, and popular discourses related to the immortalization and evaluation of the WWII and its consequences in the memory culture of Lithuania and Central and Central East Europe (CCEE). These historical and methodological problems – first of all linked to the perception of totalitarianism and Stalinism – in this paper are named as an entangled memory. In order to mark the sharpest angles of an entangled memory, this paper proposes some reflections from different academic and institutional perspectives in Lithuania. First of all, what methodological tensions originated in the academic discourse after the Prague declaration (2008) and the various subsequent charters of the EU Parliament when the communist (Stalinist) crimes were compared to the Nazi crimes by politicians and academics from the CCEE region? Why this conception was ignored by the prominent Western (leftist and liberal) scholars, and what different roles the narrative of the Holocaust plays in Western and CCEE memory cultures? Secondly, why an attempt “from bellow” to immortalize the cultural memory about the Soviet crimes in Lithuania and the CCEE is perceived as a manifestation of the ultra-nationalism but not as anti-Communism, and vice versa, how the Communist experience, the resistance movements, and the cultural memory of the Soviet victims became the object of political manipulation within the CCEE countries (both in the Left and the Right wings)? I argue that an attempt to create the homogeneous “great historical narrative” about the Communist past has failed, but this is not seen as a disadvantage. Moreover, it is a consequence of the natural heterogeneity of the collective memories when different social agents (victims, collectives, nations, etc.) are competing due to the management of the various memory places (memorials, museums, commemorations, etc.) which could be perceived as a “dissonant heritage” (Tunbridge and Ashworth). The homogeneity of the post-war Europe’s memory culture (Nazism and Holocaust vs. Communism and Stalinist repressions) is an unattainable goal, but a convergence towards the more intimate knowledge in the scientific discourse about these asymmetric totalitarian regimes is possible. The final chapter suggests that the critically re-evaluated concept of the totalitarianism paradigm is the most appropriate methodological instrument in order to understand the experience and history of Nazism and Communism in the 20th century